The U.S. Federal Reserve (FED) and bond traders have been at odds for some time over the future path of interest rates. However, we are finally getting some resolve. Officials were once dead set on gradually adjusting rates higher. Back in the fourth-quarter, the committee estimated 3% was the appropriate mark for the neutral level in overnight rates – where policy would neither stoke nor slow the economy. Meanwhile, fixed income traders routinely called for a lower trajectory given concerns over global growth. The two sides remained in disagreement until equity volatility forced the Fed’s hand.

With major stock indices in disarray at 2018 year-end, Fed Chairman Jerome Powell and company quickly began pivoting to a more dovish stand. Official statements have been revised to guide for a “wait-and-see” approach to allow incoming economic data to inspire more confidence. Policy makers met in March and kept overnight interest rates unchanged at the current level between 2.25% to 2.5%. They reaffirmed their support even more by stating they now see zero hikes in 2019 and possibly one adjustment higher in 2020 – a drastic change of direction. Members of the central bank instead centered their messaging on balance sheet normalization (i.e., selling the extraordinary number of Treasury Bonds they hold from quantitative easing in prior years).

Quantitative easing saw the Fed purchase a significant amount of assets to inject liquidity into the system. The intent was to provide support to a once struggling economy, but this also meant the Fed’s balance sheet expanded significantly – pushing yields artificially lower. With the economy recovered, the Fed argued the support is no longer necessary, and began reducing their balance sheet holdings (or draining liquidity) to normalize conditions and yields. At first, markets were okay with the Fed’s tightening operations, be it via shrinking their books or higher benchmark rates. Fed

Funds Rates started moving gradually higher, and equities climbed with little complications. However, cross currents from slowing global growth and political uncertainties worldwide started moving in, triggering fears that rates were ascending too fast and risking a recession. According to Chicago Mercantile Exchange (CME) group data, futures are implying a 95% chance rates stay the same at the next meeting in May:

Perhaps even more interesting, the odds of rates staying the same by the end of 2019 have dropped significantly to 42%. Furthermore, traders now see almost a 60% chance overnight rates will be reduced at least 0.25% by December:

The Fed and markets may still be at odds (although less so than before), but it is at least clear both camps have turned more cautious on outlook. With growth forecasts trending lower, interest rate expectations have naturally declined.

We believe recession fears are overdone. We side more with the Fed, and foresee officials remaining on pause until further notice from economic data.

What are the Implications for ExxonMobil Households?

As many of you know, there are two categories of employees when it comes to their pension/lump-sum options. Those who were born before 1958 and hired before 1998, they take 95% of the quarterly average of the 30-year Treasury Rates, these individuals are given the title of “Grandfathered” category. For those who were born after 1957 or hired after 1997, they use a combination of short term, intermediate term, and long term corporate bond rates, and as you could guess, these individuals are considered “Non-grandfathered.”

For the grandfathered individuals, we know that the discount factor for the 2nd quarter of 2019 will be 3.00% based on the past performance of the 30-year Treasury rates, and we now know the third quarter discount rate will also be 2.75%. The question is, where do we go from here? If we had to make a projection on 30 year yields in the short-term, rates are likely to remain volatile as headline risk continues to influence markets, especially on light summer volumes. However, in the medium to longer-term, macroeconomic fundamentals point to higher rates as “transitory” factors should pass, global economies gain further strength and global central banks taper accommodations.

As long as we maintain an average below 3.026% for the quarter, then the ExxonMobil discount factor will round down to 2.75%…right now we are at 2.989%. For planning purposes, we believe the fourth quarter discount rate will stay flat at 2.75%.

Just as a little extra data, here is the ExxonMobil Discount factor for the grandfathered category going back to 2011:

For those in the “nongrandfathered” category, it is difficult to easily see the overall impact when short term rates are moving at different speeds, or even different directions. To address this, we estimate an equivalent “single rate” that makes comparison easier. In summary, there is a DECREASE in the discount rates for “nongrandfathered” category from second quarter to third quarter of about .34 basis points. For planning purposes, we are seeing the segments moving down even further for the fourth quarter as well, although the numbers that drive the discount rates used are solely based off of May and June interest rate activity.

The pension/lump sum conversation is just one part of any household’s financial plan. We encourage all to review this in conjunction with their financial advisor. Please feel free to reach out if you have any questions.

Stay up to date with our most recent news and updates!

Options vs. Stocks: A Guide to Determining Which Are Right for You 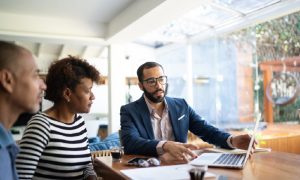 How to Know When You Need a Financial Advisor

What Is an ETP? Here’s What Investors Need to Know

IMPORTANT DISCLOSURES: Please remember that past performance may not be indicative of future results. Different types of investments involve varying degrees of risk, and there can be no assurance that the future performance of any specific investment, investment strategy, or product (including the investments and/or investment strategies recommended or undertaken by Bogart Wealth, LLC (“Bogart Wealth”), or any non-investment related content, made reference to directly or indirectly in this commentary will be profitable, equal any corresponding indicated historical performance level(s), be suitable for your portfolio or individual situation, or prove successful. Due to various factors, including changing market conditions and/or applicable laws, the content may no longer be reflective of current opinions or positions. Moreover, you should not assume that any discussion or information contained in this commentary serves as the receipt of, or as a substitute for, personalized investment advice from Bogart Wealth. Please remember to contact Bogart Wealth, in writing, if there are any changes in your personal/financial situation or investment objectives for the purpose of reviewing/evaluating/revising our previous recommendations and/or services, or if you would like to impose, add, or to modify any reasonable restrictions to our investment advisory services. Bogart Wealth is neither a law firm nor a certified public accounting firm and no portion of the commentary content should be construed as legal or accounting advice. A copy of the Bogart Wealth’s current written disclosure Brochure discussing our advisory services and fees continues to remain available upon request.

Work with a financial advisor who puts your needs first.