The most fascinating paradigm is how the bond markets have reacted following the election.  Below is a chart that demonstrates the shift in the yield curve before and after the elections, majority of which is the bond market reacting to promises of debt fueled stimulus. As of February 13, 2017, the 10-year yield was at 2.45%, and the 30-year at 3.03%.  Markets now expect inflation to be 1.88% over 10 years, with the trend picking up). 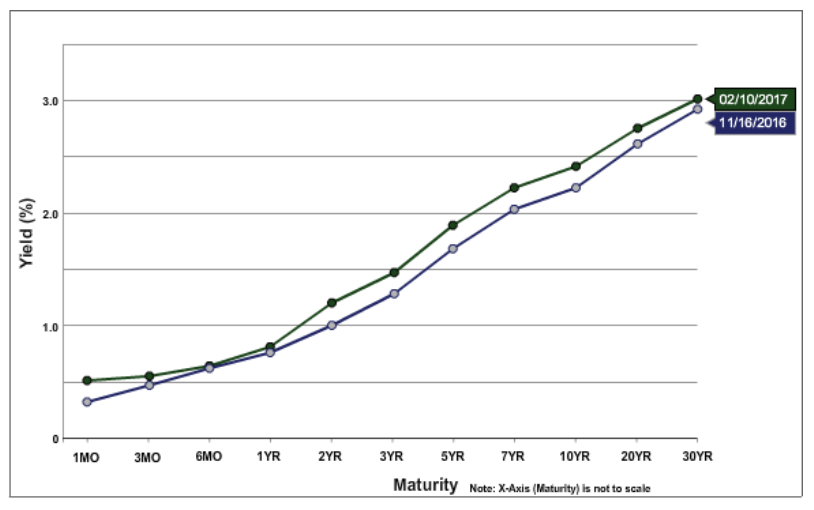 Prior to the election, there was already a lot working in favor or rising interest rates including: improving global economic growth; global inflation and inflation expectations coming off of a bottom that leads to higher interest rates; and, central banks acknowledging that negative rates aren’t working as intended, and are shifting to steeper yield curve objectives to help strengthen banks.

If we had to make predictions from here, we would say that in the short/medium-term rates are probably going to pullback as the market realizes that this post-election euphoria has been completely based on the potential of promises. The faster-than-expected yield spikes can also be interpreted as the bond market’s message to the new president elect to tread carefully as American’s creditors can still exert considerable power to constrain public spending via higher borrowing costs.  Overall, the effects of the changes mentioned above are likely to push bond yields higher and stoke volatility over the next few months. Municipal bonds could underperform Treasuries because of the likelihood that tax rates for high income earners will be lowered.

So, what are the implications for ExxonMobil households?

As many of you know, there are two categories of employees when it comes to their pension/lump-sum options.  Those who were born before 1958 and hired before 1998 take 95% of the quarterly average of the 30-year Treasury Rates as the discount rate for the lump sum; these individuals are given the title of “Grandfathered” category.  For those who were born after 1957 or hired after 1997, they use a combination of short term, intermediate term, and long term corporate bond rates, and as you could guess, these individuals are considered “Non-grandfathered.”

For those in the “non-grandfathered” category, the comparison is more difficult to make.  To simplify the comparison, we first calculate a single “equivalent” rate for someone who is retiring at age 60; then we can compare the spread of grandfathers vs. non-grandfathered.  As you can see in the table below, it is segment 1 (the short-term bonds) that has made the most significant shift in recent years.

The 3rd Quarter 2017 discount rate for non-grandfathered employees of ExxonMobil will be determined by the average of February and March 2017.  Nevertheless, they do give us an indication of direction.  Corporate rates in January were slightly lower than in December.  However, they are still higher than the average of November plus December, 2016.  Therefore, based on what we know today (which is, unfortunately, nothing useful), third quarter discount rates will be higher than second quarter discount rates for the non-grandfathered group.

The pension/lump sum conversation is just one part of any household’s financial plan.  We encourage all to review this in conjunction with their financial advisor.  Please feel free to reach out if you have any questions.

Stay up to date with our most recent news and updates!

What to Do If You Get a Letter from the IRS

Tax Preparation: Should You Hire a Tax Preparer?