Investors continue to move toward stocks despite unfavorable economic data. New scientific and medical developments in the battle against COVID-19 offer hope. Last Monday saw stocks rebound from losses earlier in the day to close on a high note. Surging oil prices gave a boost to energy shares, which helped drive the market higher. Each of the benchmark indexes listed here closed Monday in the black.

Stocks fell for the first time in three days on Wednesday as investors were hit with mixed earnings reports and worsening economic data. Treasury yields increased as bond prices fell. Crude oil prices, which had climbed following a decrease in production, also dropped for the first time in several days.

Despite claims for unemployment insurance benefits soaring past 22 million, stocks continued to climb last Thursday. Each of the three major indexes gained at least 1.5% for the day. In particular, the Nasdaq pushed ahead of its year-end value for the first time since early March.

Friday saw the release of the latest employment figures for April, which produced several historic statistics including the highest unemployment rate since the Great Depression. That news didn’t stop investors from forging ahead as stocks rose again on Friday, closing the week on a sweet note. Each of the benchmark indexes listed here posted solid weekly gains, led by the Nasdaq, which is now more than 1.5% in front of its year-end value. The small caps of the Russell 2000 finished the week right behind the Nasdaq, followed by the S&P 500, the Dow, and the Global Dow. Despite sour economic news and the ongoing rise in COVID-19 cases and deaths, states continued to slowly reopen economies.

Eye on the Week Ahead

More corporate earnings reports are available this week, the results of which are of definite interest to investors. Also, inflation indicators for April are available with the latest information on prices at the consumer and retail levels.

Data sources: Economic: Based on data from U.S. Bureau of Labor Statistics (unemployment, inflation); U.S. Department of Commerce (GDP, corporate profits, retail sales, housing); S&P/Case-Shiller 20-City Composite Index (home prices); Institute for Supply Management (manufacturing/services). Performance: Based on data reported in WSJ Market Data Center (indexes); U.S. Treasury (Treasury yields); U.S. Energy Information Administration/Bloomberg.com Market Data (oil spot price, WTI Cushing, OK); www.goldprice.org (spot gold/silver); Oanda/FX Street (currency exchange rates). News items are based on reports from multiple commonly available international news sources (i.e. wire services) and are independently verified when necessary with secondary sources such as government agencies, corporate press releases, or trade organizations. All information is based on sources deemed reliable, but no warranty or guarantee is made as to its accuracy or completeness. Neither the information nor any opinion expressed herein constitutes a solicitation for the purchase or sale of any securities, and should not be relied on as financial advice. Past performance is no guarantee of future results. All investing involves risk, including the potential loss of principal, and there can be no guarantee that any investing strategy will be successful.

IMPORTANT DISCLOSURES: Please remember that past performance may not be indicative of future results. Different types of investments involve varying degrees of risk, and there can be no assurance that the future performance of any specific investment, investment strategy, or product (including the investments and/or investment strategies recommended or undertaken by Bogart Wealth, LLC (“Bogart Wealth”), or any non-investment related content, made reference to directly or indirectly in this commentary will be profitable, equal any corresponding indicated historical performance level(s), be suitable for your portfolio or individual situation, or prove successful. Due to various factors, including changing market conditions and/or applicable laws, the content may no longer be reflective of current opinions or positions. Moreover, you should not assume that any discussion or information contained in this commentary serves as the receipt of, or as a substitute for, personalized investment advice from Bogart Wealth. Please remember to contact Bogart Wealth, in writing, if there are any changes in your personal/financial situation or investment objectives for the purpose of reviewing/evaluating/revising our previous recommendations and/or services, or if you would like to impose, add, or to modify any reasonable restrictions to our investment advisory services. Bogart Wealth is neither a law firm nor a certified public accounting firm and no portion of the commentary content should be construed as legal or accounting advice. A copy of the Bogart Wealth’s current written disclosure Brochure discussing our advisory services and fees continues to remain available upon request. This material was prepared by Broadridge Investor Communication Solutions, Inc.

Read more of our weekly commentaries! 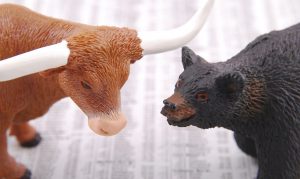